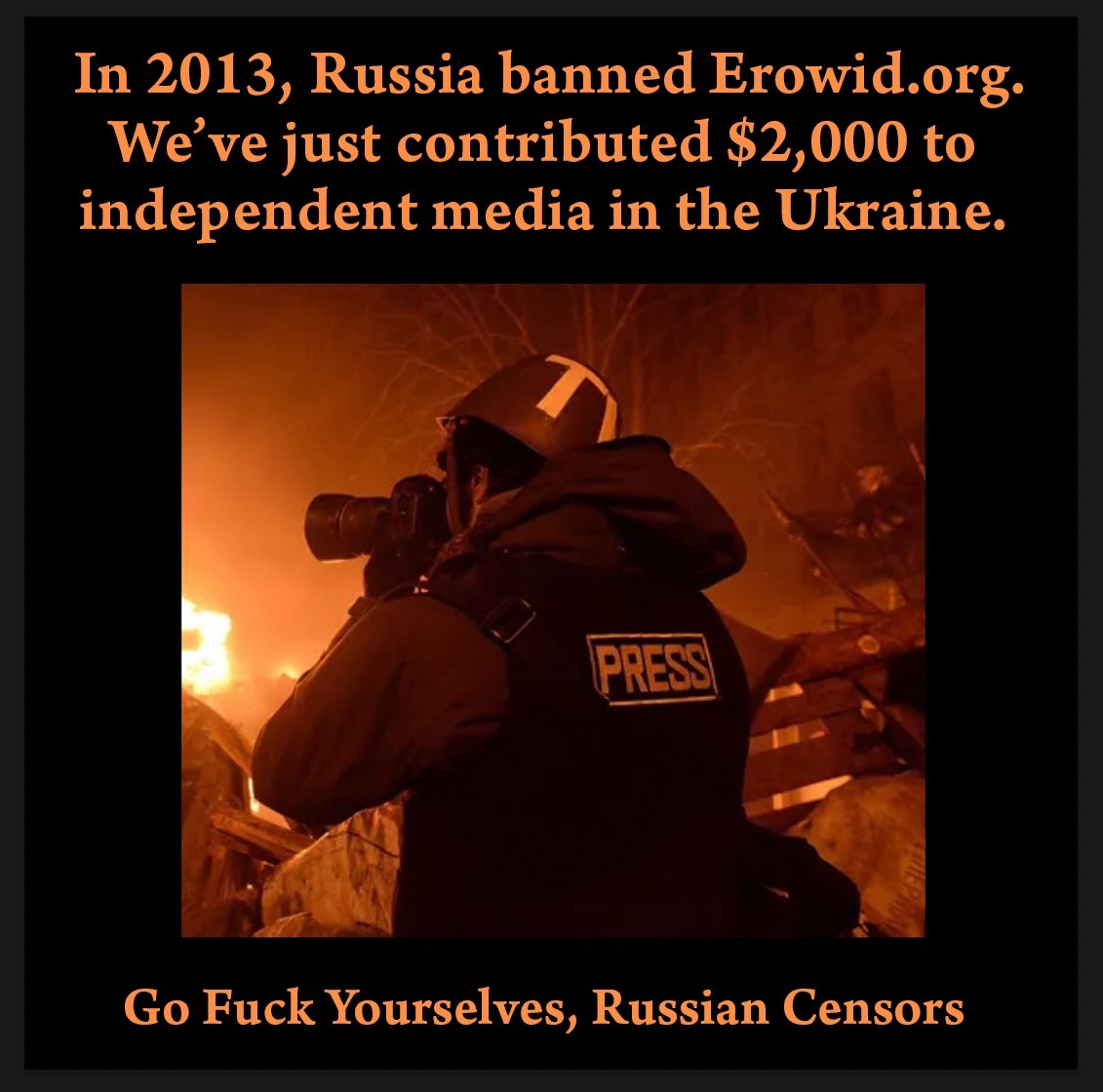 The February 2022 Russian invasion of Ukraine and the Kremlin’s attacks on Ukrainian, Russian, and global information has reminded us at Erowid how fundamental free and accurate information is to our mission.

In late 2012, Putin’s Russian Federation formally created an internet ban list. Erowid was in the first list of sites Russia ordered to be completely blocked by all ISPs and information systems in Russia. It took a year for all the ISPs in Russia to comply with the ban and Erowid.org has not been available inside Russia since.

Erowid Center just donated ~$2,000 USD to a group supporting Ukrainian independent media/news. See GoFundMe: Keep Ukraine’s Media Going
. We chose this relief fund based on recommendations from Timothy Snyder and mentions in media sources such as The Guardian, and others.

The text mirrors one of the early Ukrainian responses to the Russian invasion and attempt to decapitate the Ukrainian government (Russian warship, go fuck yourself). We’ve sent out this image via social media to mention our support of the free press in Ukraine.

Erowid Center is planning further financial support of Ukrainian free press and accurate information (as well as harm reduction and drug checking in Russia and the Ukraine, although those seem less possible in this moment). We invite suggestions for other Ukrainian or Russian organizations to support.

The GoFundMe we contributed to was set up by Jakub Parusinski, a senior executive at The Kyiv Independent, and is “aimed at helping media relocate, set-up back offices, and continue their operations from neighboring countries”.

From the GoFundMe: “This campaign is run by a consortium of The Fix, Are We Europe, Jnomics, and Media Development Foundation, as well as multiple media partners from across Europe. We are working with a growing list of Ukrainian media, including Ukrainska Pravda, Zaborona, Detector Media and others. Support is allocated based on urgency of needs in the first place, then distributed proportionally.”

Below is a screenshot from Feb 2013 of a search showing Erowid.org listed among websites censored in Russia. 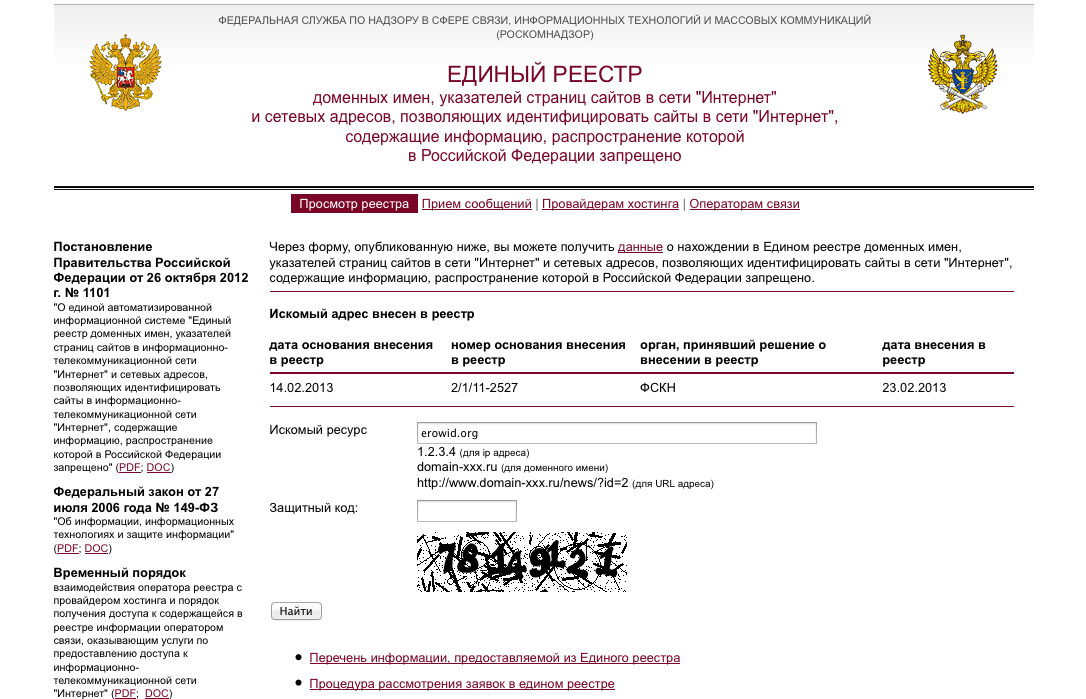 There were hundreds of other domains in the initial banned-domain list, which has grown substantially since then. We don’t have the complete records, but we saw the list more than double over the next few years. We are no longer able to access their full list, which we believe is now mostly secret.

To combat the censorship, we set up a couple of simple proxies inside Russia in 2013 which we maintained until late 2021. It was cheap and easy to rent virtual machines inside the Russian Federation and operate forwarding proxies that allowed non-Erowid domains to serve our content inside Russia uncensored. As each proxy domain got noticed and blocked, we bought another random domain name and seeded Russian search engines.

As a side note, Erowid.org has been blocked in China for even longer, starting sometime in the mid 2000s. 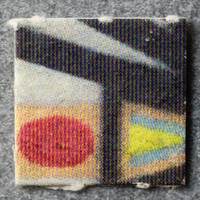 Here’s a peek into how Erowid works with a network of drug-checking experts around the world work. Just another day at DrugsData. :]

On June 30, we published the test results for a sample of 1P-LSD blotter (dd10683), confirming the presence of 1P-LSD.

On July 12, Jurek from protestkit.eu, a Polish harm reduction and field reagent specialist, inquired about this sample, noting that the Ehrlich reagent photo showed an unexpected purple reaction. Jurek pointed out that 1P-LSD isn’t known to result in a purple color in the presence of Ehrlich reagent, helping to differentiate it from LSD-25, which does cause a purple color change with Ehrlich reagent.

We discussed this with our lab and learned that there was a small GC peak they had not initially reported in the results: inactive salts and inks on blotter do not always get reported due to DEA-imposed limitations.

Given the unexpected Ehrlich reaction, we published the spectrum for the unidentified chemical and added it to the results as a second chemical present in the sample.

A chemist in the Erowid Expert Network identified the unknown chemical as tryptamine, so we ordered a lab standard for tryptamine and found that it was a perfect match via GC/MS.

Further, DrugsData’s lab did side-by-side comparison in a ceramic well plate of lab standards for 1B-LSD, 1P-LSD, and LSD-25. The third of four wells is the ‘blank’ labeled MeCN (acetonitrile) which was the solvent used to dissolve each of the ergoloid standards (1B-LSD, 1P-LSD, LSD-25). Ehrlich reagent was applied to each, demonstrating that neither 1B-LSD nor 1P-LSD turn purple with Ehrlich, where LSD-25 does.

This is the first time Erowid has seen this type of adulteration of non-LSD ergoloids with the chemical tryptamine.

The image below is a link to a video of the reagent test: 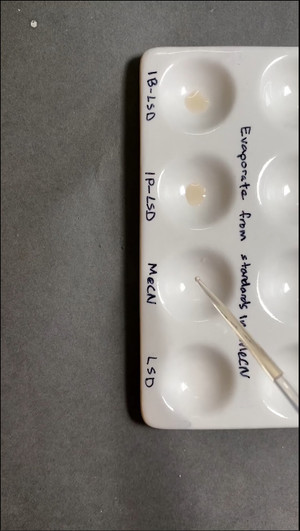 Then, a photo of lab-grade tryptamine reacted with Ehrlich. A strong purple color: