This is a description of how we identified the unidentified substance in a fentanyl sample (#12495) analyzed in March 2022. 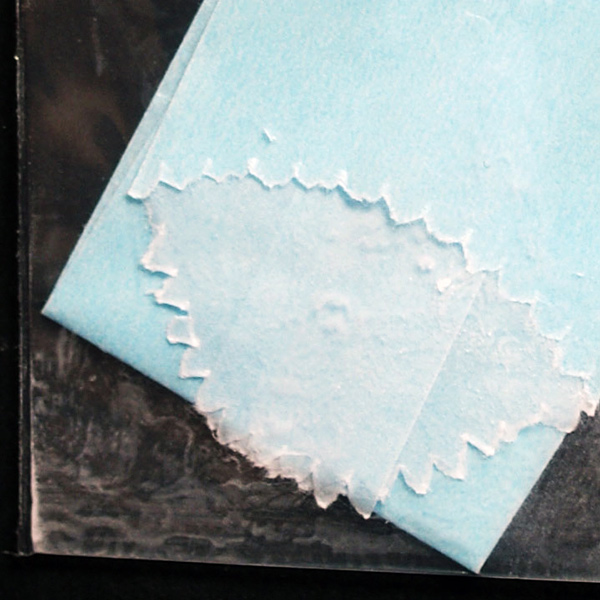 This small sample of white powder in a blue bindle was submitted to DrugsData via research partners we’re working with to do lab confirmatory testing. Besides Fentanyl and 4-ANPP, it contained a third chemical we were initially unable to identify.

We publish the Mass Spectrum (MS) images for substances we need help identifying. A colleague at UNC’s drug checking project examined this substance’s image and reached out with some clues, which put us on the path of figuring out what its structure is.

One of our top volunteer analytical chemistry experts, Eddee, found a close match in Wiley’s 2020 “Designer Drugs” library, a library that our DrugsData lab doesn’t have. The close (though not perfect) match is for ethyl-despropionyl-fentanyl (ethyl-4-ANPP). Our experts (thanks, Koby!) guess that this is likely to be much less potent than fentanyl and might not be very active, similar to despropionyl-fentanyl (4-ANPP).

There’s a PubChem page for it, but no CAS number yet:

Eddee speculated that the difference between our sample and the Wiley library match might not be meaningful. In the following image, which is pretty complex to look at, the top chemical is our DrugsData sample’s unidentified substance. The lower chemical is the Mass Spectrum for the presumptive ethyl-despropionyl-fentanyl. The middle part of this image is a comparison of the two, with our sample on the top (lines going up) and the proposed match on the bottom (lines going down). You’ll need to open it in a new tab to see the detail, it’s dense stuff. 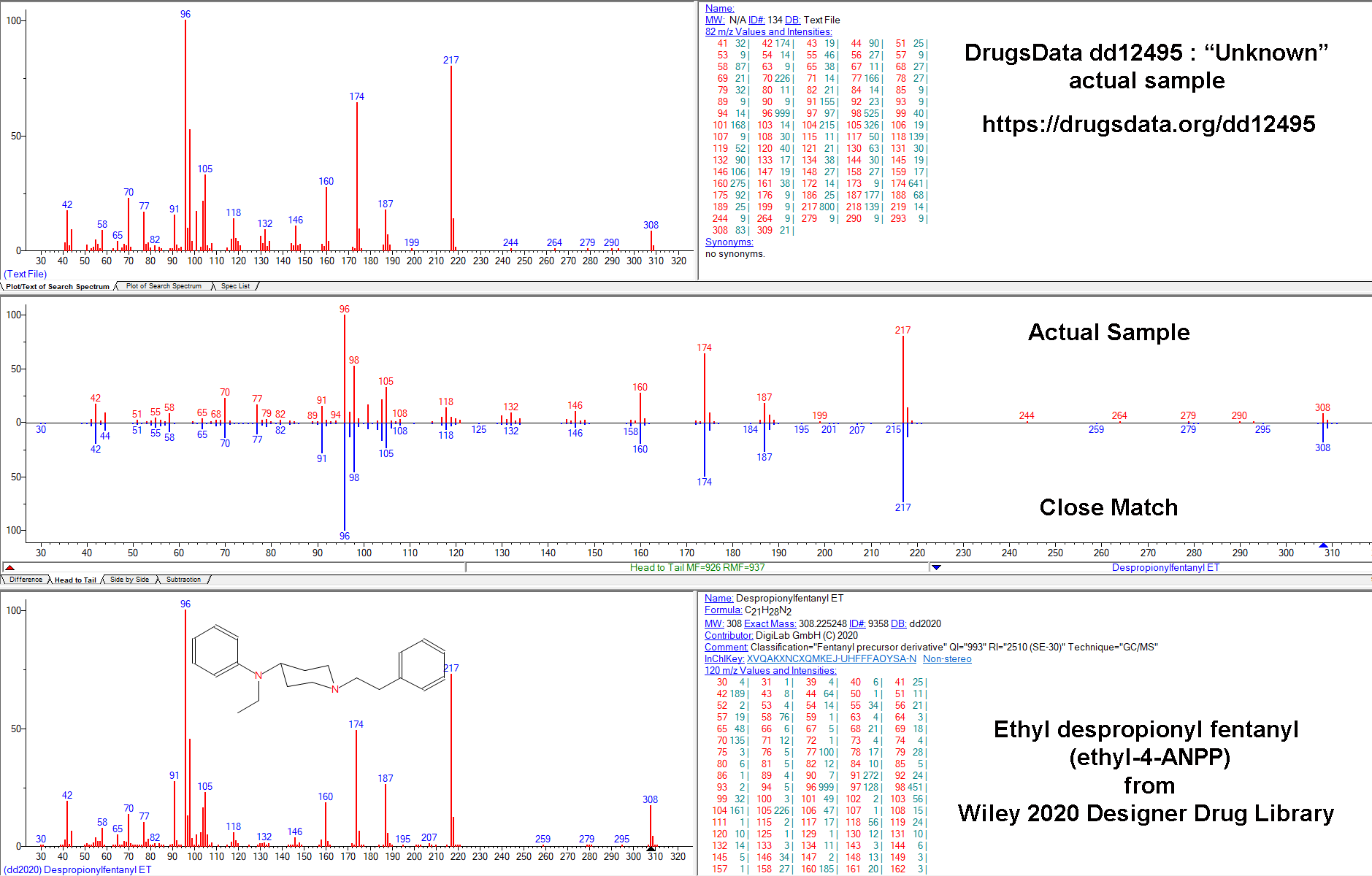 What you’re looking at are the relative heights of the largest peaks (vertical lines), aka the “ions”. Mass spectrometry (MS) relies on breaking up a chemical with a high energy stream of electrons; Erowid’s DrugsData lab uses an “electron spray” method. The resulting bits are highly charged ions that get spun through a magnetic whirlwind inside a specialized detector. The heights of the lines indicate how many of each ion was detected for this chemical using specific equipment and methods. Perfect matches usually require using the exact same equipment at the same settings, but there’s a lot of similarity when using equivalent machines.

Looking at the middle graph, where the two are compared against each other, you can see there’s a short line on our sample at 199 that doesn’t exist in the lower sample. And the relative heights of some of the key ions are different between the two. That doesn’t mean it’s not a match, but it isn’t a perfect match.

So Eddee checked and his lab did have a tiny bit of despropionyl-Fentanyl (aka 4-ANPP) left in their Fentanyl Analog Screening Kit (FAS Kit, sometimes referred to as a Traceable Opioid Material Kit, or TOM Kit).

There wasn’t much left, but he decided to try wet chemistry “derivitization” (a simple synthesis) using iodoethane, and was able to get a tiny amount of product he believes to be ethyl-despropionyl-fentanyl. He then ran that new product through a GC/MS and got the following output.

As above, in this image our unidentified substance is on the top; Eddee’s new ethyl-despropionyl-fentanyl is on the bottom.

Again, if one looks closely, there are some important differences between our sample (in blue on the top of the middle graph) and the newly synthesized chemical. There are several complexities we can’t completely account for. First, Eddee had only a teeny tiny amount of his synthesized chemical and sometimes “very low signal” amounts of a drug can have different Mass Spectrum profiles. Usually this doesn’t make a difference in which ions show up (except at the shortest peaks), but it can cause the relative ratios to be slightly different. Second, Eddee isn’t using the exact same GC/MS brand, model, and components as we have.

We might be able to change our GC coil and run parameters to better match this, but it’s so close, we’re going to consider this matter closed.

If you’re interested, you can check out the unidentified substances detected by DrugsData in 2021-2022 that haven’t been solved yet. This list changes as we make identification breakthroughs, thanks to tips from the Erowid Expert Network and others.

In an amusing postscript, one day after Eddee finalized this identification (Apr 4, 2022), DEA Special Testing and Research Laboratory (SFL1) wrote that they had come to the same identification of the so-called “308-G impurity”.