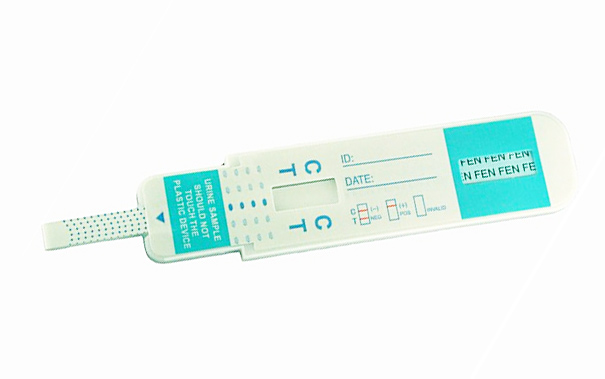 With fentanyl and fentanyl analogs haunting the opioid crisis in North America, some harm reduction field workers and users have been experimenting with what cost-effective reagent-based field tests might have to offer. One method that has been explored is the repurposed fentanyl urinalysis test-strip, where rather than dipping the test-strip in urine, it is dipped in a solution of the drug itself. A panel presentation covering the topic of drug checking and the opioid crisis was held at Drug Policy Alliance’s 2017 Reform Conference.

Since two samples included in the November 6, 2017 batch of EcstasyData results came with notes saying the sender had used a fentanyl test-strip on their sample before sending it, we’re starting to look at what that means for how we report EcstasyData results in such cases.

The question was posed by one sender,  “Would like to know if these immunoassay fentanyl tests actually work.” Like many Yes/No questions that people have about drug analysis, the answer is a combination of “it depends” and “it’s complicated”.

Hot Spots
In answering the question, it helps to remember that not all powders will be completely evenly homogenized and may contain “hot spots” with uneven concentrations of a given chemical in sub-parts of the larger amount of powder or crushed crystalline material.

Powders and tablets that have more than one component to them aren’t always evenly mixed. Sometimes there’s a higher concentration of a drug in one or several areas. Think of a burrito that has hot salsa in one end of the burrito but not the other. If you bite into the burrito on one end, it’s spicy. On the other end, it’s not. Or a chocolate chip cookie — the chocolate chips might not be evenly distributed in the cookie. We’ve discussed homogenization in EcstasyData samples before when talking about traces of drugs in samples sent to the lab.

Hot spots are a bigger deal when it comes to fentanyl drugs or other similarly potent drugs, that are active at doses below a milligram but are sold in powders weighing hundreds of milligrams or grams.

Sub-samples of Sub-samples
When a powder sample is received by the EcstasyData lab, the lab tech preparing it for analysis first does a very simple partial homogenization by shaking the sample container or stirring it a little before extracting a sub-sample with a clean metal or plastic spoon. The sub-sample is then dissolved in a solvent and the technician confirms that the material dissolves completely or may take additional steps to get a fully dissolved, consistent liquid sample.

Someone using test-strips on powders or tablets at home is facing a similar issue of potential hot spots.

Can’t Be Sure
If a fentanyl test-strip is used to check a drug sample and the result is consistent with the presence of fentanyl (a so-called “positive”), there are several possible explanations, some including fentanyl being present, and some where there is not fentanyl present (“false positive”). A test-strip can also be difficult to read.

Some Positives are False Positives
A positive result with a test-strip can mean fentanyl is present in the sample, either deliberately, or by contamination. Tablets might have come into contact with the substance and have a tiny residue left that could trigger a positive field test.

An unknown and unknowable number of other conditions can cause false positives on urine drug screen strip-tests. Non-fentanyl drugs might trigger the field test to show positive. The problem of false positives is the reason urine strip-tests alone are insufficient to prove someone has taken a given drug in legal or employment contexts. Positives from urine screens are always double checked using an advanced technique such as GC/MS to confirm or exclude the simpler, cheaper strip test.

Test-Strip Outcome Can Be Hard to Interpret
Test-strips and other field tests often have a wide range of possible strengths of color changes. It is common to get results that are not 100% clear in what they mean.

EcstasyData can’t comment on whether fentanyl test-strips in general are useful in detecting fentanyl in drug samples. Each situation is unique.

We are keeping an eye on this topic.

PS: In August 2017, Erowid confirmed that the DanceSafe fentanyl test strips give false positives for buprenorphine. When mixed at a concentration of .01mg per ml water. We have another draft post that hasn’t seen proper review yet that goes over this in detail.