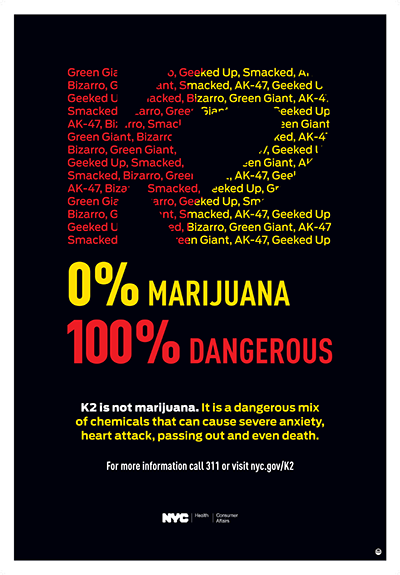 The filename for that image on their site is “K2-BusShelter” and the campaign is designed to be seen by the general public in the United State’s largest city. As we call it, the United States’ only Real City.

Perhaps the most interesting part of the campaign is the suggestion that natural cannabis is not dangerous. Their main catch line is:

This mirrors a lot of what we’ve been hearing from drug geeks, parents, and government regulators since the release of Spice, K2, and synthetic cannabinoid receptor agonists (CRAs) in 2006/2007:

Everyone would rather have young people smoking pot instead of waxy solid research chemicals from China. Everyone.

The threat of synthetic CRAs being a replacement drug for cannabis is so frightening, it is part of the pressure that has moved us to the point where cannabis legalization is pretty much a done deal in the US. The disaster that is prohibition can take full ownership of the dangers that the city of New York warns people about here.

And, of course, the synthetic cannabis replacements are often far more illegal to possess than plant cannabis. NYC technically decriminalized marijuana in the 1970s. In 2016, cannabis possession for personal use 25g or less is a “violation” / infraction — a ticketable offense with a fine between $100 and $250. Since it’s not a legal ‘crime’, being caught with cannabis does not trigger most of the negative social and legal repercussions of ‘drug crimes’.

The text of their info about “K2” says:

K2 is 0% marijuana and is 100% dangerous. Since 2015, there have been more than 6,000 synthetic cannabinoid-related emergency department visits in NYC. Males account for approximately 90% of these emergency room visits. Death is a rare but serious risk associated with the use of K2. In New York City, there have been two confirmed deaths caused by K2.

Since the chemicals found in K2 vary from packet to packet, and potency can differ even within one packet, the effects of K2 are unpredictable. People who use K2 may feel fine one time, and become extremely sick the next. Regular users may also experience withdrawal and craving.

Some of the adverse health effects of using K2 include: extreme anxiety, confusion, paranoia, hallucinations, rapid heart rate, vomiting, seizures, fainting, kidney failure, and reduced blood supply to the heart. If you see anyone who is unconscious, unresponsive, or experiencing a seizure, call 911.

Their PDF FAQ states the following:

What are synthetic cannabinoids (K2)?

Synthetic cannabinoids are a class of compounds designed to mimic the action of 9-tetrahydrocannabinol (THC), the primary psychoactive constituent of marijuana. But, K2 is not marijuana. Many different synthetic cannabinoids can be manufactured. The chemicals involved can cause unpredictable and dangerous effects, detailed below.

How is K2 packaged?

It is sold as incense, herbal mixtures, or potpourri with a variety of names including, but not limited to “Spice,” “Mr. Nice Guy,” and “Green Giant” It often carries a warning that the products are “not for human consumption”. An expanded list of product names can be found on the next page.

What are the dangerous effects of K2 use?

The most common adverse effects that have been reported include lethargy, confusion, drowsiness, respiratory depression, nausea and vomiting, tachycardia (increased heart rate), paranoid behavior, agitation, irritability, headache, seizures, and syncope (loss of consciousness). Severe side effects may include acute renal failure and significant negative effects to the cardiovascular and central nervous systems. In rare instances, use of synthetic cannabinoids has been linked to death.

What is the legal status of K2 in New York State?

Who has experienced negative health consequences?

In New York City, males account for 90% of K2-related emergency department visits. Patients have a median age of 37 and 99% of the patients are age 18 or older.

There has been a rapid and significant increase in K2-related emergency department visits in New York City. These substances have the potential to be extremely harmful due to their severe adverse effects and a mistaken belief that they are a safe, legal alternative to marijuana.

Names under which these products are being sold include, but are not limited to: AK-47