Sasha's father, Theodore Stevens Shulgin, was born in Russia on the eastern slopes of the Ural Mountains. He attended military school and became a second lieutenant in World War I. During the Russian Revolution, Theodore fought for the White Army. When the Red (Communist) Army was victorious, he was forced to flee Russia, traveling 3,000 miles on horseback across Siberia to China, and then to the United States.

Buried deep in a cardboard box I found two photos, apparently of Theodore's father. In one (facing page) we see a white-bearded man with three girls. On the back of the photo are handwritten the names: Grandfather "Stevens" Alexander Shulgin, with Nadja, Valja, and Anna.

The photograph that got me interested in trying to understand the family names is one showing "Stevens" Alexander with a younger woman, standing by a plain wood coffin containing the body of an older woman. Her head rests on a pillow and the coffin is lined with straw.

Fyodor would be Theodore, Genrieta would be Henrietta (Sasha's mother), and of course Aleksandre is Dr. Shulgin himself. The inference I draw is that the dead woman is Sasha's grandmother.

In another box I found a letter from Sasha to his grandmother from 1935, when Sasha would have been about ten years old. The letter does not conclude, and, given that it is located at the Farm in California and not in Russia, it is not clear that this letter was ever sent. It reads:

Yes it's true that we have bought a farm. 9 acres in all a garage, store room, and a house with a sun deck. About 200 yards from the house down hill is the spring. I have a lot of fun shooting birds. Once quite a time ago I and a friend of mine set part of the farm on fire. Our farm is about 6 miles from Uncle Harold's farm.

I'm now in the low sixth grade which is just about the end of elementary. Why don't you "COME UP AND SEE ME SOME TIME".

Today I went out to the farm a little early. George, this friend of mine who has freckles, red hair (and quite self-modest) went out with us. When we arrived I shot like a bullet into the farm-house and got my gun and a little bit of ammunition. We played about for about half an hour with the gun. Then we were called upon by my father to do a little bit of work. [...]

This letter appears to answer the question of when the Shulgin family moved from Berkeley to the farm near Lafayette. The letter is dated Dec 1, 1935 and return-addressed on Spruce Street in Berkeley. The family had purchased the farm but had not moved there yet; presumably that happened in 1936. The house they moved to on the farm is not the one that stands there now; it burned down some years later. Sasha's lab was constructed in the basement of this destroyed house.

Rubik's Cube Era
In a box, I found a yellow envelope containing Sasha's many pages of detailed notes, illustrations, and analysis of the Rubik's Cube. There were also two popular books of the day proffering solutions to the Rubik's Cube, which leaves us with the enigma of whether or not Sasha actually "solved" the Cube himself. This mini-collection gives a glimpse into one of Sasha's many momentary avocations and his detailed, problem-solving approach. 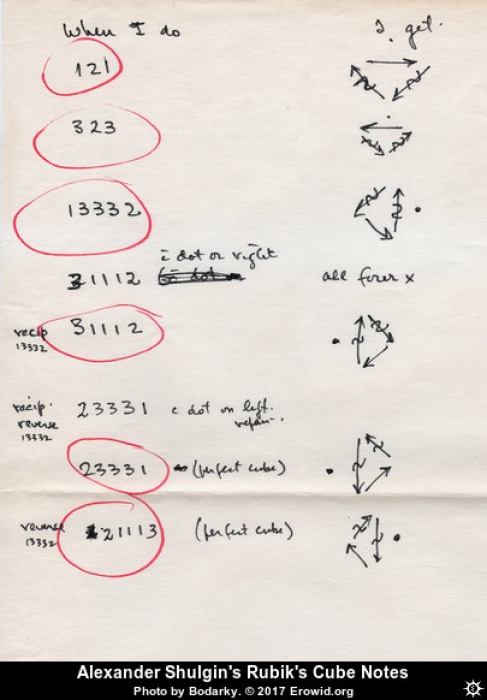 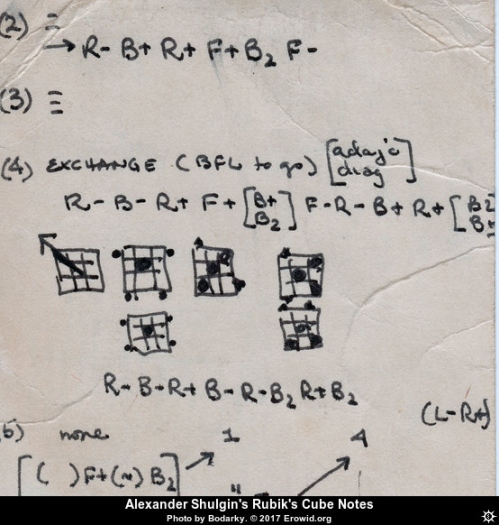 Photo Credits #
Revision History #
[ back to culture ]   [ back to characters ]   [ back to shulgin_alexander ]
Content & design © 1995-2020 Erowid.org. Permission required before publicly reproducing Erowid info.